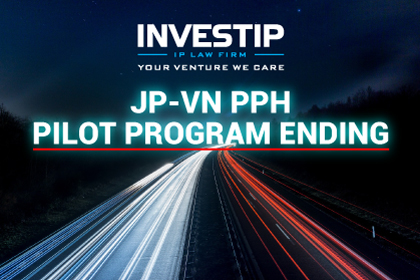 The Intellectual Property Office of Vietnam (IPVN) has just announced that the last quota of PPH requests under the pilot was full on 26 January 2022.

The Patent Prosecution Highway (PPH) pilot program between the IPVN and the Japanese Patent Office (JPO) was for a period of time from 1 April 2019 to 31 March 2022, in which the volume of PPH requests would be limited to 200 per year, with up to 100 requests accepted in the stage from 1 April to 30 September of each year, and the remaining 100 requests accepted in the stage from 1 October to 31 March of the following calendar year. Accordingly, there were six stages and the last stage ended on 26 January 2022 as reported above – no more PPH requests will be received under the pilot program.

The IPVN and JPO will evaluate the effectiveness of the PPH pilot program and discuss for next actions which may be:

– Newly signing a program rather than a pilot program,

– Extending the pilot program for the next three years for instance, or

It is expected that the evaluation result would be available around March 2022.

Because the number of PPH requests receivable was limited, applicants often filed PPH requests right after a stage began, when the quota had not yet been full; a lot of PPH requests were filed on the starting days of the stages. This PPH program is quite effective in accelerating patent examinations in Vietnam; however, the statistics below seem to be telling something otherwise.

As shown in the table, for Stages 5 and 6, they lasted 105 and 117 days, respectively, for 100 PPH requests to be filed; while for Stages 1 to 3, all of 100 PPH requests were filed on the starting date. The question is whether the attractiveness of the PPH program to applicants is decreasing.