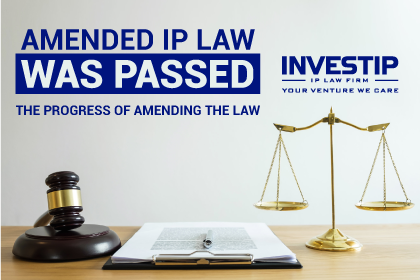 In the meantime, below is the progress of amending the law.

After more than 15 years of implementation, Law on Intellectual Property (IP law) No. 50/2005/QH11 effected from 1 July 2006 (amended and supplemented twice in 2009 and 2019) revealed certain shortcomings and limitations, especially in the context of the intensive, extensive and comprehensive international integration of Vietnam. In that situation, the Vietnamese Government considered it very necessary to improve the IP law in order to meet the requirements of practice, the requirements of administrative procedure reformation, to ensure effective implementation of international commitments on IP in the Free Trade Agreements (FTAs) of which Vietnam had been negotiating or signed. Furthermore, this is also intended to promote the application of scientific and technological research outcomes to production and business, contributing to the national development of socio-economic.

In response to the requirements of the aforementioned context, Resolution No. 11-NQ/TW dated 3 June 2017 of the 5th Plenum of the 12th Central Committee of the Communist Party of Vietnam (CPV) set out the task of improving the institutions on IP in the direction of encouraging creativity, ensuring transparency and high reliability and effectively protecting and enforcing IP rights. After that, the drafted amendments were developed and introduced for debates and public consultation, then discussed and passed by the National Assembly of Vietnam with the following complex progress:

The amending of the IP law is a step forward in perfecting the institution of IP in order to overcome practical obstacles and inadequacies for improving the effectiveness and efficiency of the state management of IP, contributing to promote the developments of the economy, culture and society of the country. When the final version of the amended IP law is available, we will get back with the main amendments to the IP law. Should you require any further information or assistance, please contact us at patent@investip.vn

By Do Tuyet Nhung and Nguyen Thi Le Na