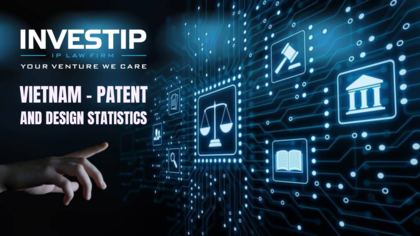 The Intellectual Property Office of Vietnam (IPVN) has posted a list of domestic design and patent cases (the applicants/owners of which are Vietnamese entities) that have been published in the first six months of 2022. Accordingly, the statistics show the most updated situation of domestic patents and designs.

The statistics indicates the origins of the cases from 63 provinces/cities in Vietnam. While Hanoi is the capital and Ho Chi Minh (HCM) city is a main economic center of Vietnam, along with this, the chart below shows the big numbers of cases from the two centers.

The statistics also include numbers of granted patents as shown below.

Besides, the IPVN has also posted the numbers of 2021.

Accordingly, we have the below figure showing the patent filing data of the last 10 years.

Similarly, we have below the corresponding figure of designs that shows the filing data of the last 10 years.

However, contrast to the patents, the proportion of domestic designs is significantly larger. For instance, in 2021, the number of domestic applications occupies about 60%.

Overall, the speed of granting has increased but with a slight reduction in recent years, which is revealed by the below statistics.