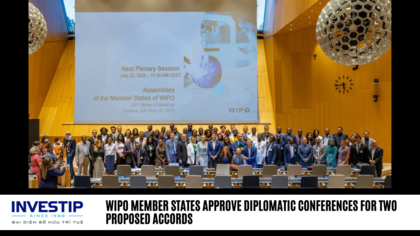 On 21 July 2022, WIPO Member States approved the convening of diplomatic conferences for two proposed international agreements: one pertaining to the protection of designs to ease cross border trade and a pact related to intellectual property (IP), genetic resources and traditional knowledge associated with genetic resources.

Following years of negotiations on both topics, the WIPO General Assembly decided to move to diplomatic conferences – or dedicated negotiating rounds where agreements may be concluded – no later than 2024, for each of the draft agreements.

In remarks to delegates following the decision, WIPO Director General Daren Tang said that while negotiators would still need to bridge significant gaps on key issues in any new treaty, he described the delegates’ decision as a breakthrough and pledged the Secretariat’s support in helping negotiators to navigate the important next steps.

“Today is a triumph of multilateralism, of us as a General Assembly, moving together as a community to make a difference for people everywhere,” Mr. Tang said. “Of course there are disagreements, there will be divergences – this is just the beginning of a whole new set of conversations. But this is an important step and on behalf of me and my colleagues in the Secretariat, I pledge our full support for you on this journey.”

“All I ask is that you give this your full attention and care because in the end, these proposed treaties are not mere pieces of paper – they could really have an impact on people around the world,” he added.

After gavelling the agreed agenda item to applause from delegates, Chair of the WIPO General Assembly, Ambassador Tatiana Molcean, Permanent Mission of the Republic of Moldova to the United Nations Office and other international organizations in Geneva, said: “Some difficult decisions were made today and member states showed great understanding and respect for each other’s positions. As Chair of the General Assembly, I was proud to see member states come together to take their negotiations towards a final resolution.”

What is a Diplomatic Conference?

The traditional method for concluding or revising treaties has been the holding of a diplomatic conference of plenipotentiaries specifically convened for that purpose. Diplomatic conferences are held to negotiate and adopt or revise multilateral treaties.

About the proposed Design Law Treaty

The proposed Design Law Treaty (DLT) aims to help designers obtain easier, faster and cheaper protection for their designs – both in home markets and abroad.

The proposed Treaty would streamline the global system for protecting designs, which are an integral part of many brands, by eliminating red tape and accelerating protection procedures. If approved, these changes would benefit the community of designers, with particular impact for smaller-scale designers with less access to legal support for registering their designs. In particular, the DLT would make it significantly easier for SMEs in low and medium income countries to obtain design protection overseas.

The design industry is responsible for about 18% of employment and 13% of GDP in Europe, where data is available.  Given the design activity as expressed in domestic design applications filed, this points to an important potential in many developing economies.  The benefits of a vibrant design sector go far wider than GDP.  Design can support efforts in education and sustainability, and can support community building.

Work on the simplification of procedures for the protection of industrial designs was initially started in the WIPO Standing Committee on the Law of Trademarks, Industrial Designs and Geographical Indications (SCT) in 2006 and gradually matured into a set of draft Articles and draft Regulations for a Treaty.  Similar treaties already exist in the area of Patents (Patent Law Treaty of 2000) and Trademarks (Trademark Law Treaty of 1994 and Singapore Treaty on the Law of Trademarks of 2006).

Since 2010, text-based negotiations on an international legal instrument relating to intellectual property, genetic resources and associated traditional knowledge (TK), as well as on the protection of TK as such and traditional cultural expressions/expressions of folklore, have been ongoing in the Intergovernmental Committee on Intellectual Property and Genetic Resources, Traditional Knowledge and Folklore (IGC).

Genetic resources, such as plants, animals and microrganisms, are valuable inputs in the life sciences and TK associated with them is scientifically valuable and integral to the economic and cultural well-being of indigenous and local communities the world over.

A new international legal instrument developed within WIPO would address certain intellectual property questions related to access to, use of and benefit-sharing in these resources and knowledge systems. For example, one of the main ideas supported by many countries is that applicants for patents whose inventions use genetic resources and associated TK should disclose that fact and other related information in their patent applications.

This is referred to as a proposed new “patent disclosure requirement”. Other ideas include more extensive use of databases of information about genetic resources and TK that would be useful for patent examiners in avoiding the grant of erroneous patents.

Proponents for a new international legal instrument argue that it would harmonize diverse national systems, foster the sustainable development of indigenous and local communities, provide legal certainty and predictability for businesses, and improve the quality, effectiveness and transparency of the patent system.